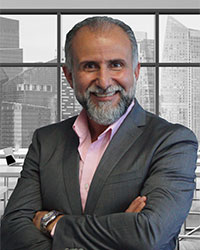 Hossein, as an electrical engineer was an executive at Motorola for many years, leading a team of engineers in developing high tech pagers and later mobile phones. He left Motorola in late 90's and started a high tech communication company named Infopage, providing wireless products used for transmitting messages to LED signs and TV sets in restaurants, hotels and airports. His company grew exponentially and within one year after inception it was acquired by a large wireless firm. As an entrepreneur, next, he developed a complex hardware/software system to capture a child's electronic fingerprints, photo and other information needed by the police in order to aid in finding a missing child. The service was offered to parents in schools and day cares in Miami. Quickly after launch, Hossein franchised Guard-A-Kid and began offering franchises to those who wanted to start a similar business in their area. Hossein's business quickly grew to be ranked as the leading franchise in it's industry, while being ranked consistently among the top 500 franchises and the fastest growing franchises in the nation. By 2010, only five years after it initial launch, the company expanded to over 175 franchises in 11 countries worldwide. Guard-A-Kid was acquired in 2010 by an investment firm. After the rapid success with Guard-A-Kid as a franchise, he quickly became recognized as a franchise expert and was approached by many companies that requested his advice on franchising their business. In 2011, he founded Franchise Creator, providing franchise consulting services to companies nationwide. Hossein is currently the CEO of Franchise Creator and along with his team of experienced franchise consultants works with business owners who wish to expand their business nationwide through franchising. By providing a free initial franchisability assessment, the team at Franchise Creator can determine if a business is ready to be converted into a franchise operation. Franchise Creator has quickly grown to multiple offices throughout the nation, with more offices opening each month. Franchise Creator has now franchised hundreds of businesses throughout the country and has helped them grow from one or two locations into tens of locations nationwide (and worldwide in some cases). After franchising a business, Franchise Creator helps sell franchises for that business. Hossein is considered an expert in the franchise industry and is actively a business adviser to many globally recognized brands. Hossein and his companies have been featured multiple times in articles featured in recognized publications and news outlets including Entrepreneur Magazine, NBC News, CBS News, Franchise Times Magazine, Specialty Retail Magazine, Opportunity World Magazine, INC Magazine, The Miami Herald, Des Moines Register and more. Hossein has also been on many Podcasts regarding franchising and business expansion.

Ever wondered why some emerging franchise brands grow significantly faster than others? This presentation covers what tools a new franchise brand should have prior to launching its franchise offering. We also discuss the most advanced and unique lead generation sources in order to attract investors interested in buying your franchise, including best methods to reach the ever growing millennium investor community. In this presentation, we also cover the most effective franchise sales techniques that keep your franchise sales system both ethical and legal. We show you examples of various emerging brands that have grown to tens of locations within a short few months and the systems they used to achieve that. The talk also discusses real examples of how you can be a good franchisor and maintain a steady and healthy growth of your franchise system. We discuss why out of two dozen sub sandwich franchise systems, only a handful have made it to thousands of locations and how you, as a new franchisor can become a leading franchise brand in your industry.